Assessing Progress Made, and the Future of Development Approaches to Preventing Violent Extremism (PVE)

This report provides an analytical reflection of the content, observations, and recommendations of the second global meeting on preventing violent extremism (Oslo II: Assessing Progress Made and the Future of Development Approaches to Preventing Violent Extremism), held on 23-24 May 2018 in Fornebu, Norway.

The report contains the following sections:

Building upon the first global meeting, the Oslo II meeting was organised jointly by UNDP and the Norwegian Ministry of Foreign Affairs to take stock of progress made, share experiences, and distil lessons on policy- development, research and programming on PVE.

The meeting revealed that progress has been made on PVE research and knowledge production, especially in the areas of: drivers of extremism, youth perceptions and the recognition of the roles of young people in PVE, reintegration of disengaged fighters and returnees, the role of media including online pathways to radicalisation, gendered analysis of violent extremism as well as the role of women. In addition, formal and informal PVE partnerships have emerged between the United Nations system and other relevant stakeholders.

United Nations Member States are also championing the development and implementation of National Action Plans (NAPs) on PVE, including through the mechanism of the Group of Friends on PVE and through the
twin resolutions on sustaining peace by the General Assembly (A/RES/70/262) and the Security Council (S/ RES/2282). Furthermore, UNDP is leading the process of developing tools that could be adapted across contexts, to measure the impact of PVE programming. As a result of these developments, the Oslo II meeting reinforced the view of an emerging PVE community of practice.

Despite different methodologies and thematic focus often adopted by PVE community of practice, there are
broad agreements on the principles that underpin PVE work, based on an understanding that PVE work is closely aligned with both the 2030 Agenda and sustaining peace agendas. There is emerging consensus on the centrality of rule of law and rights-based approach to PVE; promoting an inclusive and multi-sectoral approach; integrating gender in PVE; and, the importance of locally rooted research and documentation on PVE.

The many recommendations that emerged from the Oslo II meeting are documented in the main body of this report, at the end of each section. However, some key recommendations across the thematic areas include: 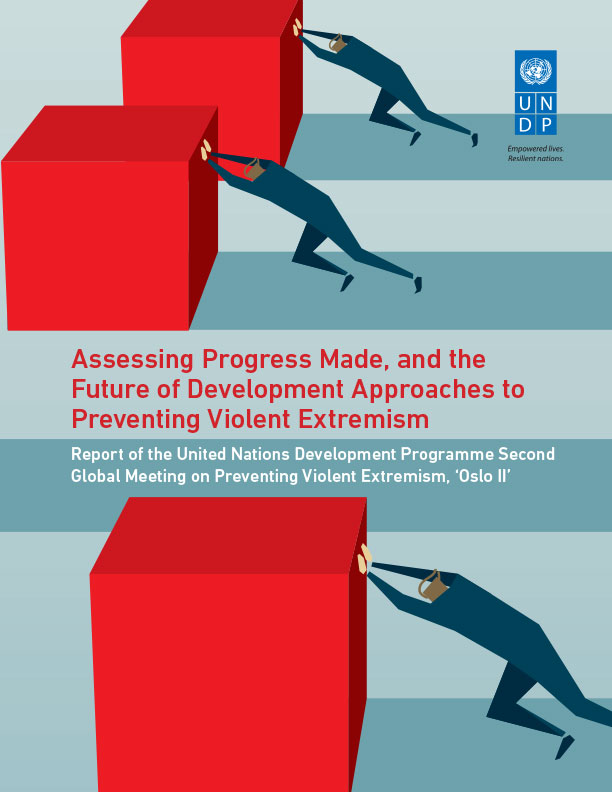